I haven’t written here for a long time. It feels good to be forging a routine/rooting again. I know.  No excuses but I’ve been busy with my last experiment detailed in “Goal: Define work terms on the female principle”. The culmination of which is set for tomorrow, Monday 14th Jan when I make a grand announcement to my boss and outline my plans for 2013. In the time being, it is apt to start this year’s post not just with a ‘Happy New Year’ people and a ‘Thank you’ for encouraging me by reading me, commenting and sharing my posts throughout an erratic 2012 and promises to be more strict with myself in 2013; but to continue on the theme pervading my waking hours with this painting. 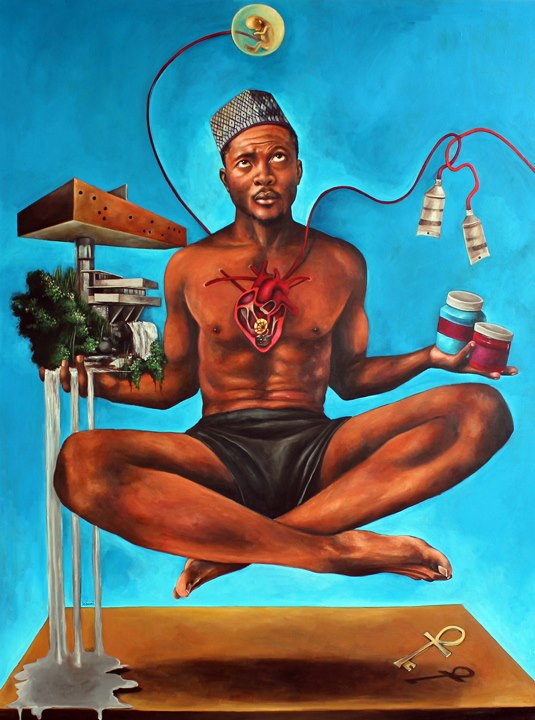 So here is introducing a Nigerian painter, Komi Olaf, currently based in Toronto that I stumbled upon on my cousin’s facebook page and whose work I have sat with for many hours over the course of the 1 week since my discovery and now writing this blog post.

Komi Olaf is a renaissance man. A Painter, Photographer, Spoken Wordsmith. His website speaks for itself and is filled with many wonders I am still exploring and falling in love with.

I’m not an art critic, nor will I attempt to even pontificate in arty terms here. I just want you to experience the works and tell me what it provokes in you, what you thought of whilst taking it all in. For me, here is a list of the paintings that have ‘moved’ me and I want on my wall:

2013 – ‘Self Portrait for my Future Daughter or The Floating Dreamer’

I promised myself not to make any sweeping statements and this isn’t one: 2013 is going to be a year to Go and Discover, to Remember and Remake, To follow and Nourish your ‘Ori’:  “Ori la ba bo, a ba f’orisa sile” meaning ‘It is the inner self we ought to venerate, and let divinity be.’

Great read in the Guardian today (well 5th October – I am catching up on the world, now I have my head out of work project mode) on a topic very close to my heart. Women at work and the balance we need to negotiate, define and claim as our right.  Take a read here of ‘Women at work: Forget the balance, this is the merge’

I am such an advocate of this. Women do need, no, it is our duty to ‘remake the work place in our image’. It really is not enough to just give ourselves a pat on the back that ‘we made it’ to the top without renegotiating the terms to include what we, as females, have to balance: work, life, family/children without feeling like we ‘failed’ at any or all.

This idea of defining those terms and being empowered enough to demand them is truly changing the terms and negating ‘male supremacist’ ideals that we live in. Women executives need to redefine this from the top, and be supported by women still climbing the ladder to create the framework we need in the workplace.

I know this first hand. The more Senior I become in my field the narrower it becomes to actually achieving all I need to without the ‘ career fear’ factor setting in. Can I have children now and not mess up my career? What am I going to do as a mother who wants to work, needs to work for my own self-fulfillment and well-being? Will this make me a bad mother? Will society judge me? Can I afford child care? Are the crippling costs of child care in the UK really supporting women to go back to the workplace? What if I don’t have a choice as a single mother? If I was living in Lagos, what would my worries be?….the questions are endless and we alone are answering them so why not, now, renegotiate the terms in our favour.  Interestingly, my next pipeline project will be working with 3 executive males with me as the only SME to aid them achieving the strategic vision. What will this mean for me?  It will be interesting how we navigate my need to balance my work-health as well as family-children needs. Neither of which are negotiable but I am still capable of navigating it all  and doing a great job without feeling like I ‘failed’ in any if I define the terms and not have them defaulted for me.

I am true to myself. As the song I was learning on my guitar this weekend rightly declares: ‘I’ve got to do me, no matter where I’m at and it ain’t easy. But it’s my life, my life, my life…’

So, I’m putting my ideals to practice. I’m game. Nothing to lose really and my male counterparts can actually benefit and learn from it too. I am going to buy the book and will keep you posted. Experiment: Define your work terms on the Female Principle.

I loath Drake. I cannot tell you how much. I despise the Young Money, Cash Money crew morons with Lil Wayne at the misogynistic helm of it all with a passion I can hardly express coherently without wanting to throw my computer at the TV or the Radio into the dustbin when they are on either. This was never music to me, this is an assault that makes me want to get my fatigues out and go to war banning this crap from the airwaves!

Last night, I watched the VMAs, when Drake the moron declared his award dedication to ‘any kid who ever walked alone..this one’s for you..BITCH!”  What does this mean? Why would ‘Bitch’ be an appropriate end to an otherwise sensible dedication for kids who were bullied or made to feel an outsider.

I swear I saw Rihanna mouth ‘Arseholes’ as the moronic clan trooped on stage to make this absurd declaration. She would be right. They are the worst kind of ‘edutainers’ polluting the minds of the young and the ignorant to perpetuate an attitude that really must be stopped, erased, wiped out of our society and consciousness. To further incense, Lil Wayne and 2 maybe 3 or 4Chainz (who cares how many chains you have?) got on stage to further provide an onslaught of misogyny under the guise of music; with full support of the frankly confused Nicki Minaj in tow….words fail me.

My brother used to send me (not anymore) music splattered with Bitch, hoe, and more imagery of violence than I can stomach in any life time, let alone the one I have. I had several strong sharp words but I am still astounded that even a boy with as much sensitivity and love as he, with 3 sisters who have loved him unconditionally, could be flippant about this verbal violence towards women. He knows better. Surely, he knows better? Then this article I was sent by a friend this morning clarified some of these questions for me. I am sharing it here.

There really are men out there who are conscious, honest about their experiences, who are raising sons and daughters with a consciousness of patriarchy that has shaped them and how they too ‘awakened’ are challenging those instincts in themselves, but more importantly that the challenge should also be directed amongst each other.

Following the controversy of Lupe Fiasco’s ‘Bitch Bad’ and the arguments one can leverage at his convoluted offering; I do believe this as an important element to begin deconstruction of patriarchy in the minds of boys as they become men; as well as men who might not be aware of the ‘default’ they subscribe to. Its not an easy road but pontificating about it within a closed group of intellectual women, who albeit right, isn’t going to cause a shift in their thinking. It needs to be out in the ‘playground’, boys and girls calling each other out and being empowered to do so with courage as ammunition that sometimes it is good to be the kid walking alone and no it doesn’t make you weak. In reality, the journey – any journey – begins internally, alone. In the dark corners of our minds where we are saying ‘No more. This is wrong’.

Let me know your thoughts. In Love and Light.